Chilling description of what took place in Zimbabwe in Washinton Post:

President Robert Mugabe summoned his top security officials to a government training center near his rural home in central Zimbabwe on the afternoon of March 30. In a voice barely audible at first, he informed the leaders of the state security apparatus that had enforced his rule for 28 years that he had lost the presidential vote held the previous day.

Then Mugabe told the gathering he planned to give up power in a televised speech to the nation the next day, according to the written notes of one participant that were corroborated by two other people with direct knowledge of the meeting.

But Zimbabwe’s military chief, Gen. Constantine Chiwenga, responded that the choice was not Mugabe’s alone to make. According to two firsthand accounts of the meeting, Chiwenga told Mugabe his military would take control of the country to keep him in office or the president could contest a runoff election, directed in the field by senior army officers supervising a military-style campaign against the opposition. Read the rest. END_OF_DOCUMENT_TOKEN_TO_BE_REPLACED

It’s a wise decision, I think, Mugabe and his supporters in power showed that they’re not leaving under any circumstance so whatever was going to take place on June 27th was clearly not a democratic election – with African countries failing at any sort of action against Mugabe and his cronies killing off the opposition leaders, it’s the only right thing to do:

NY Times: ”Conditions as of today do not permit the holding of a credible poll,” Tsvangirai said. ”Given the totality of these circumstances, we believe a credible election is impossible. We can’t ask the people to cast their vote on June 27 when that vote will cost their lives. We will no longer participate in this violent sham of an election.”

Mugabe is old and surely these are his last days, but those who support him now, those who robbed the people of Zimbabwe, those who think that violence and intimidation are the way to rule should probably think twice and look around at, for example, the results of the first round – people want change and they will get it eventually because if we learned anything in the 20th century it is the fact that no power is able to hold on to its position without popular approval.

So the “elections” in Zimbabwe are heading into a run-off – clearly a move by Mugabe aimed at keeping the power – with “war veterans” harassing the opposition, surrounding countries quietly condoning the bullshit, it’s going to be a great show of democratic power – does anyone still believe that this is a fair election? But then again, Mugabe isn’t in the business of explaining things, is he? Everyone should be thankful that he finally decided to do anything about the situation. The problem now is of course a very serious one: if opposition ignores the run-off, Mugabe “wins” the election, if they participate, then Mugabe’s thugs will intimidate the voters and even if MDC wins again, how’s to say the results will ever see the light of day? So this is a “do-over” election and we all know it’s a mockery of democracy:

HARARE (Reuters) – Zimbabwe’s opposition leader defeated President Robert Mugabe in the presidential election but faces a run-off vote after he failed to win an outright majority, the electoral body said. Movement for Democratic Change leader Morgan Tsvangirai won 47.9 percent of the vote on March 29 and Mugabe took 43.2 percent, said Chief Elections Officer Lovemore Sekeramayi. The result was announced after a verification process by the candidates to check the result, but an opposition MDC spokesman said the announcement was scandalous and described it as “daylight robbery”. He said the party executive would decide on the next move. Read the rest.

I remember in 1990s in Russia people sabotaged elections by voting “Against All” – do they have that option on the Zimbabwe ballots? – Russian goverment since decided to eliminate the option since “Against All” sometimes “won” the elections… 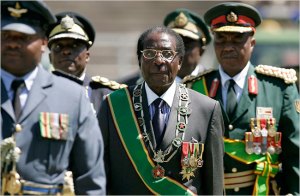 It is of course silly to imagine that postcolonialism is always a discourse of liberation and local self-determination. It is also mistaken to think that African countries have long moved on from their colonial past. However, the situation in Zimbabwe and South Africa show that the colonial past is still very much an issue today: South African Mbeki refusing to acknowledge a crisis is afraid of being accused of colonial sympathies, Mugabe speaking for the first time since the election is all about painting the fight as a matter of anti-colonialism: END_OF_DOCUMENT_TOKEN_TO_BE_REPLACED

Robert Mugabe is preparing to defy international pressure and launch a systematic crackdown in Zimbabwe aimed at reversing his defeat in the presidential election two weeks ago, according to dissident policemen who have been briefed on his plans.

Through an intermediary, the policemen told The Independent on Sunday that they have been ordered to be ready to deploy today or tomorrow. With their ranks swollen by so-called “war veterans” given police uniforms, they would take over constituency “command centres” used in the 29 March elections.

Two weeks ago the ruling Zanu-PF party not only lost its majority in the House of Assembly, but, in the presidential contest, Mr Mugabe is believed to have finished well behind Morgan Tsvangirai, leader of the opposition Movement for Democratic Change (MDC).

The growing crisis over the government’s failure to release the election results, coupled with rising violence in rural areas where the MDC did well, has reinforced fears of a crackdown. Mr Mugabe has also defied international pressure to declare the result, spurning a regional summit on Zimbabwe’s problems called yesterday by the President of neighbouring Zambia.

Among some recent and disturbing news from Zimbabwe are the rumors of violence, intimidation and the usual repressive tactics that Robert Mugabe is known for – what makes this situation so intriguing is the fact that Mugabe began his political career as a fighter for independence. He is not the first one to go from the freedom fighter to dictator, but it’s still very sad to see an old man trying to hold on to the power that he was fighting against not so long ago. With most of the country in poverty and most of the land going from the white owners to Mugabe cronies (despite Mugabe’s loud rhetoric of giving the land to the poor), one wonders if anything will help the situation. The powerful and corrupt elite that still lives in luxury despite the inflation and the catastrophic unemployment is not going to give up their privilege voluntarily – let’s see how the institutions of democracy really work. South African leaders are holding a talk about the situation:

Saturday’s talks in Zambia were called amid the failure of Zimbabwe’s election commission to publish results of the presidential election held 12 days ago. The opposition has refused to take part in any second round run-off vote. Mr Tsvangirai is in Botswana, where a minister quoted him as saying he had left a tense Zimbabwe to ask for help. At a news conference in Johannesburg, South Africa, on Thursday, the Movement for Democratic Change said the delay of results amounted to “a constitutional coup d’etat”. Read the rest.

Robert Mugabe has been in power for 28 years and, despite Zimbabwe’s astonishing 100,000% inflation (it’s always bad when you need a comma to indicate a number of inflation) and general economic conditions, he intends to stay in power. Well, this seemed to be his campaign strategy: I was here before and I will not leave!  Early reports show that the opposition candidate – Morgan Tsvangirai – got 67% of the vote and is about to declare victory, but the official results are not out.

BBC contributors say opposition activists have been celebrating in the towns of Bulawayo and Mutare in the east. A spokesman for Mr Makoni told the BBC News website that the MDC had “swept the board” in the parliamentary election, with several ministers losing their seats. But the Zimbabwe Electoral Commission said the country must wait for official results and appealed for patience, as four elections were held at the same time.  Chief elections officer Lovemore Sekeramayi said in a statement: “The commission notes with concern that some stakeholders have gone on to announce purported results of the poll when in fact the results are being verified and collated.” Those results are not official results of the poll.” The MDC says the commission was appointed by Mr Mugabe and is not to be trusted. BBC

So let’s see what the official results will be, but one needs to understand that if it is indeed the case that 67% voted for Tsvangirai, then rigging this kind of election takes time, so let’s wait and see everyone, let’s wait and see…