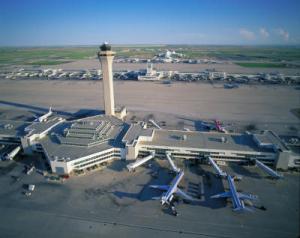 I was thinking the other day about this CFP, in particular, in-between spaces like bus depots, train stations and airports that may make borders fuzzy, so I decided to see if anyone has thought philosophically/theoretically about such spaces.  After a lazy (and cursory) search I turned up some interesting things, most of all, some work by Gillian Fuller.

Fuller wrote an interesting article published in Borderlands back in 2003 called “Life in Transit: between airport and Camp,” and has a website to go along with a book she co-authored called Aviopolis: A Book about Airports.  Fuller writes, in “Life in Transit:”

As geophysical space ‘diminishes’, and borders (as we once understood them) melt into air. So too do territorial dimensions of the state. The powers of borders take shape less through mountain ranges and seas, than through legislative and ‘capitalist parliamentarian’ structures that exclude (or include) through modes of compliance/non compliance (for/against, democracy/terrorism, citizen’s rights/human rights). New cellular spaces, axes of logic, affects and rules to abide by cut through the geophysical borders of ‘nation states’. This process isn’t new. Colonialism reorganised geographical space into sovereign zones of ideological and economic allegiances. Place became terra nullius long ago, wiped of indigenous particularities and incorporated into a totalising space of urgent global improvement. But as Virilio (1983) notes, speed propels geo-politics into other dimensions. Geography, he claims, has been replaced by chronography, which measures distance in time and speed, and in which a technological logic of speed and competition has reconfigured global territory.  At the crossroads of this transition is the airport, where the chrono-politics of jet travel collide with the remnants of national geo-politics. In other words, airports enact another way of thinking about global relationships. They quite literally operate through a ‘network logic’ that critically animates the categories of nation states and territory, of humans, animals, products and machines, and of material and informational modes of mobility. END_OF_DOCUMENT_TOKEN_TO_BE_REPLACED 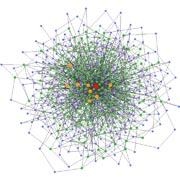 All this talk about complexity and adaptive networks reminded me of my brief, but fruitful foray into the work of Itamar Even-Zohar, a cultural/literary theorist at Tel Aviv University who developed Polysystem Theory in order to deal with dynamics, diversity and change in cultures. In addition, following from the broad Polysystem Theory, Even-Zohar is also fairly well known for his work on “culture making” and cultural repertoires, two issues that have concerned him in the last decade. Much of Even-Zohar’s work (in English and Hebrew) can be found here on his website.

Polysystem Theory, as developed by Itamar Even-Zohar, emerged as a response to the overwhelming positivist discourses circulating during the late 1960s and early 1970s. Instead of a static, a-historical text-based approach to literature and culture, Even-Zohar posits a dynamic structuralism or put differently, a dynamic functionalism. This static approach is best exemplified by de Saussure wherein structuralism is a science that attempts to uncover all of the structures that underlies all of the things we do, think and even feel. Saussure then, proceeds with a synchronic study of language. As a brilliant procrastination strategy I spent a few hours yesterday and this morning re-reading and thinking through some of Even-Zohar’s essays, so here’ a bit of a summary/commentary of Polysystem Theory (most of the quotes are from Even-Zohar’s essay “Polysystem Theory.” I’m far too lazy to cite properly since I just cut and pasted the quotes I liked from his text–hey, it’s a blog after all!) END_OF_DOCUMENT_TOKEN_TO_BE_REPLACED