This review of Carlo Rovelli‘s work looks interesting, and Rovelli’s small book that’s discussed in it is also available in English but seems impossible to find (What is space? What is time?):

As some might have already noticed and I was pretty slow to discover this, some edited volumed available for preview on Google Books sometimes have full essays avaiable for your scholarly interest. May I wholeheartedly recommend this essay by Eckart Förster, “Fichte, Beck and Schelling in Kant’s Opus Postumum” which begins with a nice summary of Kant’s view of science and, specifically, physics? Förster’s contribution to the study of Opus Postumum is well known, of course, and I think in light of the recent discussions of science, realism, so-called correlationism and such, it is important to understand what Kant actually wrote, as opposed to various crude misinterpretations of his philosophy. Kant, as is also well known, began his philosophical career as a philosopher of nature (a philosopher of science would be a good modern designation) and, as Förster, shows in his Introduction to the English edition of Opus Postumum and various essays on the subject, ended his philosophical career working on a manuscript that would complete his system.

I think Förster’s opening citation from the second preface to the first Critique is essential, as far as I am concerned, in any discussion of the workings of science – because I’m lazy, here’s a text from Norman Kemp Smith’s translation available online: END_OF_DOCUMENT_TOKEN_TO_BE_REPLACED

Google Books awesomeness continues and I find myself like a kid in a toystore yet again with this amazing copy of Lomonosov’s 1746 translation of a book on “experimental physics” by Wolff. END_OF_DOCUMENT_TOKEN_TO_BE_REPLACED

I came across this intersting blog – check it out. Here’s an example of the post discussing Quantum Mechanics and some of it’s philosophical implications (old theme, I know, but nonetheless still very exciting for yours truly):

Foundational studies of quantum physics hold a deep fascination for anyone interested in questions about the ultimate structure of the world. Quantum mechanics (QM) is now hovering around its 100th anniversary (depending on whether or not you take the work of Planck, Einstein, or Bohr to mark its true birth). Unlike other theories, quantum mechanics has proven to be remarkably elusive in terms of pinning down what truly, absolutely, no-kidding-anymore, really exists.

The Many-Worlds Interpretation seems crazy to a lot of people, physicists and non-physicists alike. Personally, as a theorist of the astrophysical sort, I see its allure but remain suspicious of the enormous commitment it asks. What may be most interesting about it, however, is how, by taking things to an extreme, it raises two of the oldest and deepest questions we can ask:

What truly exists, and what kind of access do we have to it?

An interesting conversation with Edward Witten on string theory – my exposure to String Theory is primarily limited to Brian Greene’s entertaining NOVA programs on PBS:

This year Witten is in Europe, on sabbatical at the CERN particle physics lab near Geneva in Switzerland, where the mathematical foundations of reality are about to be rocked by the Large Hadron Collider (LHC). As it happened, he turned up on the day last September that the LHC switched on. “Ed’s very active, so it’s great to have him around,” says Luis Alvarez-Gaume, head of CERN’s theory department. “He’s a genius, it’s as simple as that.”

Here’s a link to a rather compelling documentary(can’t get it to embed properly for some reason) about physicist Julian Barbour, who suggests time doesn’t exist in his book The end of Time.   He’s also rather interested in some of Leibniz’s ideas.  Papers available on his website.  Check it out…

I found this to be pretty interesting – check it out: 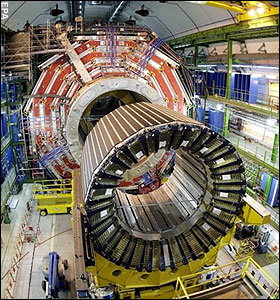 The mad scientists at Geneva’s CERN will be running an experiment tomorrow in the Large Hadron Collider which begins an effort ever to shed some light on the fundamentals of the universe.  The Large Hadron Collider (LHC) will fire particles around its 17-mile tunnel. It will then smash protons — one of the building blocks of matter — into each other at energies up to seven times greater than any achieved before.   As I undertand it, scientists are hoping to reveal why most sub-atomic particles have mass (probably signalled by the appearance of something called the Higgs particle),  reveal why nature prefers matter over anti-matter, and maybe even overturn the Standard Model, a collection of theories that embodies all of our current understanding of fundamental particles and forces.  Cool.  I wonder if this will have any philosophical consequences, I’m especially thinking of the correlationist/anti-correlationist distinction Meillassoux draws in After Finitude (see here).  Hopefully, the LHC won’t create a black hole that will suck up the world as we know it.  Anyway, if it works as planned there will be some rather exciting things to talk about.  The Telegraph has a nice article about the experiment (see here).  Here’s some science smarties commenting (also from the Telegraph): END_OF_DOCUMENT_TOKEN_TO_BE_REPLACED