Oi, this Badiou fellow does not sound too happy!

To see a philosopher of Badiou’s stature engaged in such sniping is a shock, given the operatic architectonics of much of his work, but it is also to see him as MBK saw him: petty, self-aggrandizing and paranoid (not unjustly) about betrayal. This is one of the troubling things about MBK’s book: Belhaj Kacem charges Badiou with a number of misbehaviors and seems to be telling the truth. And yet it’s also true, as Badiou counters, that he tells it in an anecdotic and even vulgar fashion.The critique comes couched in a surprising amount of name calling, enough that his future translator may have to resort to the innovations in invective that Hergé’s used for Captain Haddock. But we must remember that Belhaj Kacem’s philosophy is in fact an avowed antiphilosophy. Perhaps because of its correspondence with his own rhetorico-emotional register, he is further empowered to accuse Badiou’s philosophy, too, of being petty, self-aggrandizing and paranoid. Reading Après Badiou, you begin to believe him.

Oh my god, oh my god, oh my god, you guys! Did you hear about the “new materialism”? No? Well you have to read this then, it’s the bestest most original philosophy out there. Just look at this introduction – doesn’t it make you really excited about this new big thing? No, not the “speculative turn” – that’s so 5 years ago. That seemed like a good idea at the time but it turned out to be a turn down the wrong alley. No, not the “object-oriented philosophy” – that is so 6 years ago and has been exposed as a big joke. No one, like, even reads that shit anymore.

Get ready, get set, get excited about the next big thing! Or at least this is what this Introduction wants you to do. How new is this “new materialism”? As new as they come! What is so “materialist” about it? It’s a big secret, ya’ll.

In academia, revolutionary and radical ideas are actualized through an engagement with scholars and scholarly traditions of the canonized past. Contemporary generations read, or more often reread older texts, resulting in “new” readings that do not fit the dominant reception of these texts… It is in the resonances between old and new readings and re-readings that a “new metaphysics” might announce itself… It rather traverses and thereby rewrites thinking as a whole, leaving nothing untouched, redirecting every possible idea according to its new sense of orientation.

Translation: academics read and reread books. New materialism is about reading old books anew, by new people with new ideas (and cool new words). Things will emerge as we stubbornly read the same books over and over again. Maybe we’ll throw in some new unexpected books, like, you know, new stuff from other disciplines?

An endorsement by the great wizard of online philosophy (Graham Harman) makes me want to read this immediately – that dude knows his philosophical fashions! But I suspect, judging by the introduction, this will have little or nothing to do with “materialism” and much to do with “new” verbal tricks and ways for bored academics to amuse themselves with new toys.

No sure if the relative popularity of my “faking it” series (yes, two posts is now officially a series) is a good thing or a bad thing: 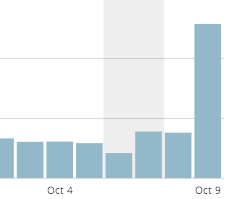 Clearly the masses are in need of faking advice…

Ah, wonderful academic life and its values – apparently at Durham University, in addition to all the other crap they put on the faculty page to indicate awesomeness, some genius came up with “Indicators of Esteem”:

Maybe it’s just a medical thing, but it would be a good practice to spread I think. Imagine all the things you can then put on your CV:

2008: The Most Good Things Happened To Me in a Single Week Award
1995: Profound Appreciator of Film and Music of the Year (awarded by Friends of Emelianov Group)
1989: Artek Pioneer Camp Scout of the Week
1985: Table Tennis Champion

So Amy Bishor’s defense is likely to be some form of insanity defense:

Huntsville attorney Roy Miller sat down with WHNT NEWS 19 just minutes after visiting Bishop at the Huntsville Metro Jail. He revealed some startling new details about the case that has grabbed national headlines.

“I just think the case speaks for itself,” said Miller, when asked about Bishop’s mental state. “I think she’s wacko.”

Inside Higher Ed suggests that wackiness comes from her Harvard education:

The lawyer for Amy Bishop told the Associated Press Thursday that she probably is insane and does not remember the shootings in which she is accused of murdering three of her biology faculty colleagues last week at the University of Alabama at Huntsville. The lawyer called Bishop “very cogent” in their discussions, but also said that she has difficulties with reality, and he suggested that her actions last week were due in part to being denied tenure, after receiving a Harvard University education. ”Obviously she was very distraught and concerned over that tenure…. It insulted her and slapped her in the face, and it’s probably tied in with the Harvard mentality. She brooded and brooded and brooded over it, and then, ‘bingo.’ ”

Of course, anyone who “after receiving Harvard education” does not get his/her way in life is justified in retaliating in whatever way they can against such society – case closed!

Surprise, surprise – she was crazy all along – no other questions need to be asked:

The revelations about the past of the biology professor accused of shooting three colleagues to death at the University of Alabama Friday are stacking up by the day.

First came the news that the professor, Amy Bishop, shot and killed her teenage brother in suburban Boston under hazy circumstances in 1986. Then that she was investigated in 1993 in an attempted mail bombing of a Harvard professor who was evaluating her work as a postdoc.

While much is still not known in the case, all the facts seem to be pointing to one question: how did a person with such a troubled past appear, from the outside, to have been carrying on a successful, normal life?

New article in New York Times deals with issues of the current changes in our educational system, but ultimately fails to address the most essential question: are we in the business of career training or are we trying to provide comprehensive education?

Students don’t want to major in philosophy or classics, therefore those majors must be eliminated. Students want to study business, therefore more business courses must be introduced. This is the basic logic. Consumers are investing money, they want definite returns, therefore university must be run like a business and administrators are its corporate managers. Students don’t like math, but they need it for business courses, therefore we are keeping math requirements. But what if students didn’t want to take Calculus or English or History or Sociology or Psychology? Why not just send them to a career training college where they will learn only about their speciality? Well, that’s not cool – we must keep up the pretense of liberal education and so on.

“We want to teach them how to make an argument, how to defend an argument, to make a choice.” These are the skills that liberal arts colleges in particular have prided themselves on teaching. But these colleges also say they have the hardest time explaining the link between what they teach and the kind of job and salary a student can expect on the other end. END_OF_DOCUMENT_TOKEN_TO_BE_REPLACED

Objectologist the Son is at it again, another grumpy post directed at PE, but, of course, he is not brave enough to actually cite or link to our conversation here: we are anonymous others who say things and do things “somewhere in the blogosphere” and so on. Read the post – judge for yourself.

Strangely enough, the objections that the Son raises are supposed to show us here how the objections we raise only reveal to everyone our careerist selves but, of course, as irony would have it, the Son ends up revealing his own self in his hapless and sulky post – someone quickly post a comment there about how he is awesome and how all those jerks at PE will burn in hell.

As for the actual “argument” advanced in the whiny post, I give you two citations from Objectologist the Son’s recent posts:

Graham Harman gives excellent advice to the people (as in “Advice to the People” – I suggest he initiates a series until this title) concerning productivity and I think he hits some great points in the process:

Why do I enter upon this topic, in a genre somewhere between confession and advice column? Because people in the intellectual sphere generally do not help each other enough. This blog has occasionally taken a personal turn, and may as well do so again here. Some of the most brilliant people I’ve met in academic life were unproductive for a time, and many of them remained thus forever without end.

The rest is here.

It’s the kind of quote that sums up the worst fears of some conservatives about academe: “No. We don’t hire Republicans because they are stupid and we are not. Why should we knowingly hire stupid professors?”

Attributed to a Duke University department chair, the quote has been getting nice play in recent weeks. It appeared June 17 in a column in American Thinker, attributed to the chair of Duke’s psychology department. On Monday, the quote was part of a slightly reworked version of the column appearing in The Jerusalem Post, this time with the quote attributed only to “the chairman of one of its major departments.” That column in turn was praised Tuesday, with the quote highlighted, in the higher ed blog of The National Review, where the statement was cited as evidence of “just how brazen and arrogant this power grab [of academe, by the left] has become.”

As the quote has gained currency, it has also been questioned on blogs such as Notes From Evil Bender and College Freedom, which speculated that the quote was based on a very different quote from a very different chair (philosophy, not psychology).

The author of the much-discussed column is Edward Bernard Glick, an emeritus professor of political science at Temple University. Inside Higher Edlocated him to ask for the source of the quote and in an interview Wednesday, Glick confirmed that there is no such quote.

The quote was very different, although not as accommodating and nice as conservative critics would want it to be, namely: END_OF_DOCUMENT_TOKEN_TO_BE_REPLACED