Nothing like closing the barn door after the horse escapes!  TSA has decided to implement some security measures in response to the failed terrorist attack on Christmas day. Here’s an excerpt from the US DHS security directive that TSA has already begun to enforce on international flights:

1. During flight, the aircraft operator must ensure that the following procedures are followed:

first day of the conference was pretty good, though the guy that did his lecture all in german was rather difficult to follow… even with the english version power point.

i skipped out of the last session of the day to go take a nap after not getting to sleep until 3am last night. now that it’s 1:40am, i’m thinking tomorrow may be a bit difficult to get through as well…. at least i’ll get an hour more sleep this time.

after my afternoon power nap, I hopped the trolley down to the Rathaus stop (apparently actually pronounced RatHouse) and headed over to Lenin’s house. It was a fun strange little trip through a bunch of little footpaths and back alleys with weird interesting shops. Once we got there we realized that, unlike what the interwebz told me, there’s just a plaque on the building, not the tour of old rooms, old artifacts, and furniture that i was hoping for.

here are lenin pictures, one of the plaque, and one of the strange half/half mirrored bust downstairs at a puzzle shop. 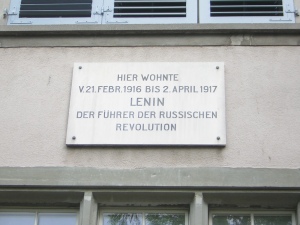 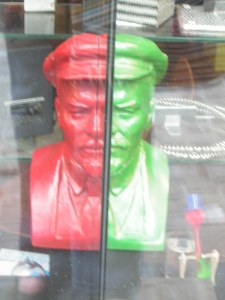 also, as noted above, today was my birthday. i have some fun pictures of the greatness of birthday dinner which i’ll post later when i wake up again.

Major problem: Walked around all day today taking pictures only to realize that when I’d uploaded that photo from my camera’s photo card, I’d left it in the computer. Now I can’t upload the pictures I took of the Marc Chagall windows at Fraumunster and the lake/mountain pictures.

In leiu of that, and because jet lag is startting to get me and I’m in desperate need of a power nap, here are similar photos I nabbed from teh interwebz.

At the request of the ever cantankerous and sometimes beloved Mikhail, I am travellogging my trip to Zurich. Step one:  I have arrived! One quasi-long and one really long plane flight later, Kevin and I hopped a ‘Ben Bus’ to our hotel and have successfully checked in.  I chomped down the complimentary gummy bears, turned on some crazy German cartoons, and took a picture so you could see what it looks like outside my window:

END_OF_DOCUMENT_TOKEN_TO_BE_REPLACED

I know this is vain and pretentious to assume that the readers of this blog care about my present spatial position, so it is clearly a great reason to post about it, even if a short notice for now: I am presently in Portland and I have to say that things are going well here and the situation on the ground is much better than the press would have us all believe. Government is firmly in control and the occasional acts of insurgency are swiftly repressed and the bloody mess is usually neatly and quickly cleaned up… I will have a full report upon my return to Pervegalit World-Wide Headquarters!

To our readers: Don’t despair!  Mikhail, Lou and Paco will continue with regular programming.

Two colleagues of mine recently made a trip to Hebron, the city in the West Bank in which Palestinians and Israeli settlers live with their hair standing on end, baring teeth at one another ready for attack. The trip was organized by Breaking the Silence, a group of former Israeli soldiers, who show tourists what the Israeli army is being asked to do to protect the settlers and cow the local Palestinian residents into submission. One person described it as a twisted Disneyland, another as a zoo, watching people live their lives sealed off behind barbed wire. END_OF_DOCUMENT_TOKEN_TO_BE_REPLACED

For those of you who are not close enough to my persona, this note is to inform you that I am presently waiting for my flight back home from sunny and strangely free-internet-free Southern California – I am informed that today is a holiday of some kind: people eat dinner with their families, discuss family things, it’s a family holiday, so being without family is very strange, almost lonely. All the restaurants announce their special “Thanksgiving Dinner” extravaganza, but clearly are just trying to cater to the lonely people community.  Since we don’t really celebrate Thanksgiving where I come from – we did happen to kill natives when we advanced eastward, but it was a long time ago and there is no holiday dedicated to the celebration of our initial encounter, say, with Burats – I return all the “so sad you’re alone at the airport” looks with defiant “я не говорю по-английски” look and keep walking.  Airport is empty! From now on I am only traveling on the day of some holiday – I had to interrupt TSA group from their extended break so that I can get through security – this place is a ghost town! I have some SoCal stories to tell, so stay tuned – stories include account of my trip to LA, my visit to Disneyland, my trip to American Academy of Religion convention in San Diego, and general observations about academic culture and palm trees. It’s good to (almost) be back home!