Daniel Barenboim is doing a cycle of Beethoven’s symphonies with his East-West Divan Orchestra, an honorable undertaking (started, I think, with an idead he and Edward Saïd had) during this year’s Proms. The first two symphonies are out.

Every time there is a discussion of composers like Beethoven, there is an unspoken assumption that his music is “universal” and understandable to all, thus it serves as a kind of cultural glue that can connect people who are not together (culturally, politically, economically and so on). And there are of course plenty of ways to disprove this general sentiment. Beethoven’s music is quite clearly not the kind of music that is universally understood and appreciated. One does not really need a history lesson here (the fact that Beethoven’s music, especially some of the very same symphonies, was rejected by contemporaries is well known). Certainly the fact that Beethoven’s music is presently known and appreciated, even by those without particularly refined musical education, means either that it does indeed contain some universal content or that it is made universal by the sheer fact of its universal spread.

The first scenario stinks of essentialism (there is some eternal essence that, once disclosed, allows every “human being” to see it and appreciate it) and some sort of cultural supremacy discourse (“our” culture contains the majority of the elements of “civilization” and Beethoven’s music or classical music as we understand it expresses them the best – take it or be left uncivilized). The second scenario stinks of cultural pessimism and relativism – anything can be made “universal” by those with means of carrying out their message (with money, arms, or sheet cultural dominant cultural presence) to the ends of the globe. (See this eerie report about an abandoned project for a fake Disneyland in China.) 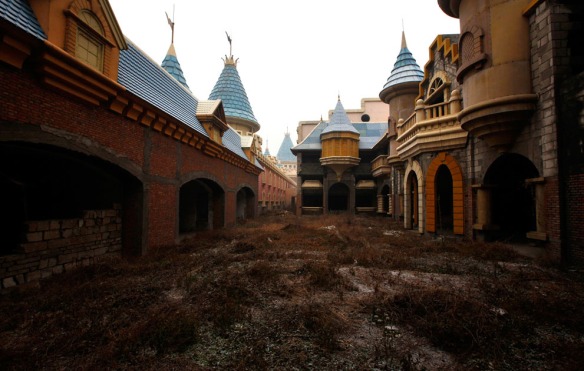 So when it comes to music, Western classical sort of music (we all know the other kind of music seems to be doing just fine spreading around the globe, although it is already unfair to separate one kind from another), is there any sense in which it contains some sort of universality? Mostly likely there is not; it is a regional phenomenon, connected to the specific type of culture and place of habitation, using a very specific set of instruments, compositional techniques, styles and so on. And yet it is perhaps one of the most sophisticated and developed things one can do with sound. Its sheer complexity, even in “simple” music of the Baroque period (“simple” of course only compositionally and structurally), is something that is unparalleled with regard to other regions. Now we don’t need to be cultural imperialists to believe that Western classical music is complex and refined in relation to other kinds of musical traditions. The problem emerges when we declare that this kind is the best kind due to this complexity and this harmonic refinement. And yet one is very much tempted to say that it is in fact the best kind of music and that is what explains its longevity.

So moving away from Western classical music (and noting that all the other kinds of Western music are clearly derivative from this tradition, and to call them derivative is not an attempt to diminish their value) we might ask a very general question that is, it appears, no longer something cultural studies (whatever this is) are brave enough to raise: does music represent some universal content that every human being can participate in regardless of his or her cultural and socio-economic background and life experience? Clearly the answer to this question must be a resounding “no” – there is no universal content that music somehow manages to represent. However, and here is where I think we must at least attempt to raise the issue of universality, it is possible that music can be made to create and to consequently share such a universal content. Universality here is understood as some extreme form of commonality (as it, for example, “death is a universal factor in life of all human beings” or “mathematical operations are universally true”).

If music is thought to be an expression, a universal expression (there are no known societies without music, as far as I am able to establish, and even if one is found, it would be an incredible exception rather than some sort of falsification of my point), of shared human experience of going about daily life of work and leisure, then, regardless of the stylistic differences among musical traditions, it must be possible to find a musical equivalent of the common human experience and to share that common elements in some musical form. Not in order to create a piece of universal music, or a universal musical language (not notation, of course, but language as a kind of musical Esperanto) – such an enterprise is doomed to fail – but in order to then attempt to connect all music into a kind of harmonious web of elements that more or less participate in that common element and are judged to be “good music” (if better expressing that common element) and “bad music” (if failing to express that element adequately). What is this common element? Where does music come from? And what about people who do not understand or appreciate music (people like Kant or Nabokov who openly stated their utter lack of any concern for music)? Are they not part of humanity in some odd sense? Or are they rejecting music in its more or less material form of particular vocal/instrumental representation while affirming it in some other form (Kant’s discussion of aesthetics hardly gives us an example of someone who is completely “tone-deaf” when it comes to art; Nabokov’s prose is another example of musicality without music)?

Perhaps instead of talking about “music” we must really talk about “art” and its ubiquitous presence? Is there a society without art? And yet music seems to be something most people are able to discuss without much trouble while “art” is almost always a veritable conversation stopper. Why? Because the notion of art is too abstract while music is always something concrete. You can always immediately experience music as something enjoyable (“I like it”) or not enjoyable (“what is this noise?”), unless, of course, you are one of those music-neutral folks, but that’s a different story (certainly deaf people and tone-deaf people can be put in the same category which does not make them deficient as human beings but simply deprived of certain human experiences).

Music then is an entryway art, and yet one might not think of it as reflecting some deeper human essence, but as connecting us to some common human experience. Usually the historical approach is to go back and try to figure out where music comes from, but this approach is useful only in the sense that it helps us understand the origin of musical culture. The real study of music as art must be, perhaps building on the history but only in order to reject it, looking for possible common elements, elements that can be reproduced and endorsed. The main issue here is the sort of Marxist problem of the relationship between culture and its material conditions (in a very primitive sort of a formulation): if material conditions “create” culture (in the sense of making certain forms of it possible – no religious psalms without religious institutions created in certain socio-economic conditions, and so on), then in what sense can music, for example, influence any significant change in these material conditions? Is there such a thing as “revolutionary music” or is there a possibility of revolution in music (meaning revolution through music)? Is Beethoven’s music revolutionary even if it no longer registers its revolutionary character because we are accustomed to it by now? What is it a revolution from and where is it trying to take us? Did his music come about as a result of some material changes or did it manage to produce some material changes? These are very simple but very difficult questions and I do not know the answers to them.

To sum, is there a sense in which, despite the musical diversity of today, one is able to discern a common element in it and, by emphasizing this common element, create music that is in fact progressive? If there is any sense in which music can be thought of as have something universal, then it is this sense of being a potentially transformative art, the last remaining potentially transformative form of artistic input in the matter of changing human society for the better. All of this sounds, of course, like a bunch of amateurish “armchair” cultural theory (with elements of naive faith in some universal value of art, some emancipatory future of music), so since it is already rather suspicious in that manner, why not go even further and ask one more question: Can music appreciation be taught or is it something acquired spontaneously and unconsciously? If it cannot be taught, how does music appreciation come about? If it can be taught, what sort of educational model should we strive for (what sorts of music should we teach others to appreciate)? These are, I think, the questions that I’d like to know the answers to…

5 thoughts on “In What Sense Is Music Universal?”