UPDATE V: New York Times now has a story about it, tries to make sense by referring to an “academic pressure cooker” – what exactly are we cooking? I wonder.

UPDATE IV: Before Shahar tsk-tsks me for being perversely obsessed with this story, here’s another curios update:

Amy Bishop was 20 years old at the time and her brother was 18.

At the time, police said it was an accidental shooting.

Authorities said Bishop is accused of fatally shooting three colleagues at a faculty meeting where she was denied tenure, which provides job security.

UPDATE III: Another suspect in the shooting? CNN reports (saw this at Zaidy’s while eating latkes):

UPDATE II: University of Alabama, Huntsville briefs the press on the situation and officially releases names of the victims and takes questions.

More information about the arrest of Amy Bishop here.

UPDATE I: More details of this bizarre story are coming out:

Sammie Lee Davis said his wife, Maria Ragland Davis, was a researcher who had tenure at the university.

In a brief phone interview, he said he was told his wife was at a meeting to discuss the tenure status of another faculty member who got angry and started shooting.

He said his wife had mentioned the shooter before, describing the woman as “not being able to deal with reality” and “not as good as she thought she was.”

This story is just coming out, but it seems that a woman at the University of Alabama, Huntsville shot three people and injured one at the meeting where she was told she will not get tenure:

Huntsville Police, Madison County Sheriff’s department and HEMSI responded to a shooting at the UAH campus at 4:00 Friday afternoon.

The shooting happened in the Shelby Center, a math and science classroom building.

Authorities said a female faculty member during a Biology faculty meeting learned she would not receive tenure. She then pulled out a gun and started shooting.

Boy, this is really strange – did she know she wasn’t getting tenure and brought the gun?

Some more details are coming in: 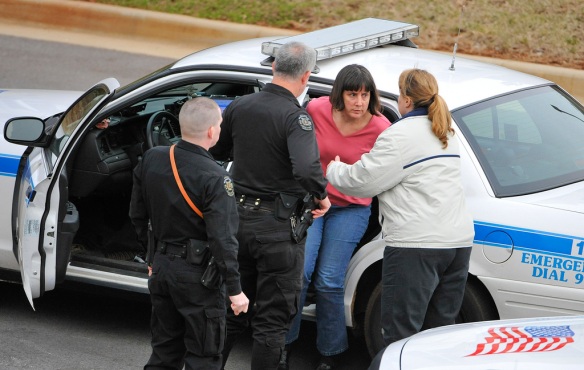 Dr. Amy Bishop, a Harvard-University trained neuroscientist, was taken into custody, and her husband has been detained. They have not been charged with a crime.

According to police, three people were killed and three were wounded when the shooter opened fire during a biology faculty meeting on the third floor of the Shelby Center for Science and Technology. The three injured people are being treated at Huntsville Hospital.