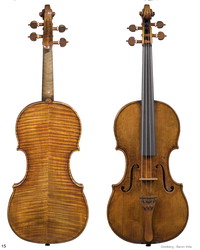 Will someone soon extend objectology into the realm of “musical objects”? Here’s some (long but awesome) food for thought: END_OF_DOCUMENT_TOKEN_TO_BE_REPLACED

Reminded of Ustvolskaya yesterday, I found this gem on YouTube – enjoy:

There’s also a great amount of her music on youtube as well. END_OF_DOCUMENT_TOKEN_TO_BE_REPLACED 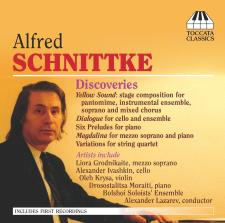 Toccata Records (a rather interesting label with a rather interesting agenda) has a new Schnittke record out called Discoveries. If you are a fan of all things awesome (or you would like to pretend to be to impress that special someone), give this a listen. You can hear some samples on Toccata website.

The output of Alfred Schnittke (1934–98) has been documented in recordings more thoroughly than that of any other Russian composer since Shostakovich. But there are a number of works which have not yet been released on CD, and four of the five here are not only first recordings; they also document Schnittke’s stylistic evolution over more than four decades of creative activity, moving from the relatively traditional Preludes, via the serialDialogue and the experimental Yellow Sound to the elliptical Variations, one of his last works, written in the teeth of enormous physical difficulty.

Sorry, a boring post to remind myself to pick this book up.  Anyway, I’m looking forward to reading this newish book by Thomas Wheatland, The Frankfurt School in Exile:

Members of the Frankfurt School have had an enormous effect on Western thought, beginning soon after Max Horkheimer became the director of the Institute for Social Research at the University of Frankfurt am Main in 1930. Also known as the Horkheimer Circle, the group included such eminent intellectuals as Theodor Adorno, Herbert Marcuse, Erich Fromm, Leo Lowenthal, and Friedrich Pollock. Fleeing Nazi oppression, Horkheimer moved the Institute and many of its affiliated scholars to Columbia University in 1934, where it remained until 1950.

Until now, the conventional portrayal of the Institute has held that its members found refuge by relocating to Columbia but that they had little contact with, or impact on, American intellectual life. With insight and clarity, Thomas Wheatland demonstrates that the standard account is wrong. Based on deep archival research in Germany and in the United States, and on interviews conducted with luminaries such as Daniel Bell, Bernadine Dohrn, Peter Gay, Todd Gitlin, Nathan Glazer, Tom Hayden, Robert Merton, and others, Wheatland skillfully traces the profound connections between the Horkheimer Circle’s members and the intellectual life of the era. Reassessing the group’s involvement with the American New Left in the 1960s, he argues that Herbert Marcuse’s role was misunderstood in shaping the radical student movement’s agenda. More broadly, he illustrates how the Circle influenced American social thought and made an even more dramatic impression on German postwar sociology.

Although much has been written about the Frankfurt School, this is the first book to closely examine the relationship between its members and their American contemporaries.The Frankfurt School in Exile uncovers an important but neglected dimension of the history of the Frankfurt School and adds immeasurably to our understanding of the contributions made by its émigrés to postwar intellectual life.

Some press about Wheatland’s book can be seen below the fold. END_OF_DOCUMENT_TOKEN_TO_BE_REPLACED

I meant to post about this, but forgot and now I was reminded that tomorrow (1/29) you can hear/see a free concert from Paris (8pm Paris time) of Gergiev conducting a couple of symphonies by Tchaikovsky (on Medici.TV): 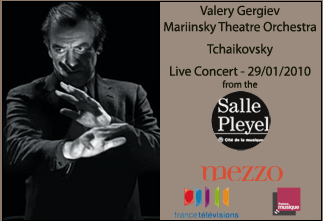 The most prestigious Russian orchestra will perform Symphonies No.3 and No.6 by Tchaikovsky within the framework of France-Russia Year 2010.  A captivating programme because of the great contrast between the two works: Symphony No.3, the only one in a major key out of Tchaikovsky’s six symphonies, with its two scherzos, clearly evokes dance music (Balanchine choreographed it). The 6th Symphony, the “Pathétique”, with its gloomy introduction, its waltz in 5/4 time (second movement), its unstoppable descending scales and its explosions, expresses a dark bitterness while remaining so full of splendour…

Yet again we have prove that the ever-popular lists of random objects (much ridiculed by many people) were not invented by Objectologist the Father: END_OF_DOCUMENT_TOKEN_TO_BE_REPLACED

While searching for a Wittgenstein reference I chanced upon this comment by Rogers Albritton:

Philosophy, as he [Wittgenstein] means to be practicing it “simply puts everything before us, [it] neither explains nor deduces anything” and it “may not advance any kind of theory” (Philosophical Investigations I 126, 109). Its aim is, rather, “complete clarity,” which “simply means that the philosophical problems should completely disappear” (ibid., 133). I’d like nothing better. Moreover, I believe it: the problems (at any rate, those I care most about) should indeed, as he says, completely disappear. That’s how they look to me. I love metaphysical and epistemological theories, but I don’t believe in them, not even in the ones I like. And I don’t believe in the apparently straightforward problems to which they are addressed. However, not one of these problems has actually done me the kindness of vanishing, though some have receded. (I don’t have sense-data nearly as often as I used to.) And if there is anything I dislike more in philosophy than rotten theories, it’s pretenses of seeing through the “pseudoproblems” that evoked them when in fact one doesn’t know what’s wrong and just has a little rotten metatheory as to that.

With this issue we introduce a new online project—the AAUP Journal of  Academic Freedom. Scholarship on academic freedom—and on its relation to  shared governance, tenure, and collective bargaining—is typically scattered across a wide range of disciplines. People who want to keep up with the field thus face a difficult task. Moreover, there is no one place to track the  developing international discussion about academic freedom and its collateral issues. Edited collections and special issues of journals have helped fill the  need for many years, but there has been no single journal devoted to the subject. Now there is. It is published by the organization most responsible  for defining academic freedom.

Publishing online gives us many advantages, the first being the ability to  offer free access to everyone interested. A link to this inaugural issue will go  out by e-mail to nearly 400,000 faculty members. We hope they forward it to students and colleagues everywhere. Online publication also gives us the  freedom to publish quite substantial scholarly essays, something that would be much more costly in print.

We invite people to submit essays for our next issue. Whether the journal is published as an annual volume or twice a year will depend in part on the  number of quality submissions we receive. We will also maintain a continuing  relationship with the AAUP’s annual conference on the state of higher education, itself founded in 2009. We are publishing four essays from the  2009 conference but expect to increase that number next time. This first  issue is devoted to essays solicited by the editor, with members of the
editorial board checking essays for historical errors. The next issue will be  conventionally refereed. Neither the editor nor the board members are ex officio. All were appointed on the basis of their publishing history and expertise.

Here’s the Table of Contents of the first volume: END_OF_DOCUMENT_TOKEN_TO_BE_REPLACED

UPDATE II: We should seriously consider going into “objectology gossip blog” business full time (see image). Also, I would like to add that, if it’s not clear to some readers, we are solely and firmly on Paul’s side of this battle, regardless of the real reasons for Harman-Ennis break up.

UPDATE: I hear some awesome rumors but I’d rather keep this as a guessing game, it’s so much more fun this way. Please, place your guesses in the comments and we’ll announce the winner later. I’m pretty sure it’s actually something banal like Harman didn’t like something about Ennis’ attitude or something, but let your imagination run wild.

A cryptic note from Paul Ennis: no more object-oriented-ness! What? Does anyone have juicy details? Someone’s been not object-oriented enough? I like Paul’s blog, by the way, (not that it matters when it comes to being trollish, I don’t discriminate) but it seems that he has crossed someone’s way – I wonder whose? Figure it out for yourself, kids: END_OF_DOCUMENT_TOKEN_TO_BE_REPLACED

While  much of Taylor’s vision for the university in the NY Times last year rubbed me, and many others, the wrong way with its defense of free market ideology (see here and here), I do agree with this:

“Peer review and specialization are the worst things for creativity. They completely militate against working outside very narrow parameters,” he says. “Somebody could do something very, very well, but what that something is might not be worth doing.”

It’s from a rather odd article about Taylor and his recently published memoir, Field Notes From Elsewhere: Reflections on Dying and Living .