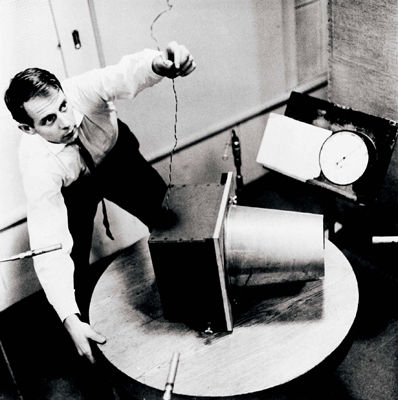 “I view my entire life, my entire work, in such a way as to ask myself: “How, as you become older do you set about integrating everything that has previously happened?”  –Karlheniz Stockhausen

This month’s Art Forum has a nice feature remembering the work of Stockhausen:

When Stockhausen died on December 5, 2007, at his home in Kürten, Germany, his fame as a composer of startlingly original and uncompromising music—whether groundbreaking experiments in electronic sound, innovative manipulations of traditional instrumentation, or unorthodox approaches to the human voice—had long since peaked, and his work was perhaps spoken of more eagerly than it was performed. Moreover, his reputation had been irremediably if unfairly sullied by an oft-repeated comment he made at a press conference only days after September 11, 2001, calling the terrorist attacks “the greatest work of art” ever. Concerned that Stockhausen’s death was, as a consequence, largely remarked as a cultural curiosity, and seeking to offer a corrective, we turned to a diverse group with deep ties to his work: composers Robin Maconie, La Monte Young, Morton Subotnick, and Maryanne Amacher (all but one of whom attended Stockhausen’s famous seminar in Darmstadt); violinist Irvine Arditti and pianist Pierre-Laurent Aimard (two important champions of the work of contemporary composers); and alternative singer-songwriter Björk. Together they reflect on the musical legacy of a man who must, by any accounting, figure among the most influential composers of the postwar era. Maconie, Subotnick, and Björk’s pieces appear below. For the rest, pick up the March issue of Artforum.

For Stockhausen, the issue was not just how art in the modern world can respond to the presence of evil but whether art deserves to survive. In past centuries, the art icons of Christianity testified to a life of suffering and transcendence among peoples for whom suffering was a way of life for which there existed no remedy other than passive acceptance and the promise of a happier life in the hereafter. On its own terms, Stockhausen’s music is likewise a testament to suffering—it is both difficult to learn and hard to listen to—but a suffering that promises relief in the here and now to those who believe and are prepared to put in the necessary work. The notion of performance as goal-directed activity from an incomplete script is routine in Hollywood and on Broadway but traditionally alien to art music. Yet a Stockhausen score may require the invention of new skills or techniques in order to be realized effectively. A perfect example is Mixtur (1964; revised 1967) for electronically modulated instrumental sounds. Problems with the equipment led to a public rift with Boulez, who had agreed to conduct the premiere and was offended that the electronic sounds were unacceptably distorted. In 1970, after encountering cleaner technology in Japan, Stockhausen added a filter stage to create the magical “altered reality” of Mantra for two pianos and ring modulation. The problem of distortion was solved, but Boulez was unimpressed and Mixtur did not obtain a retrofit.

i remember very well sitting in his studio in cologne , surrounded by twelve speakers ( four in the four top corners , four in the middle , and four in the bottom corners ) , him creating a current traveling up and down , swirling around us as the force of nature electricity is . god of thunder . my insides pulsating to his noise , primordial , modern , and futuristic . he celebrated the sound of sound , both in his electronic music and his acoustic music as well ( for example , my favorite piece of his , stimmung , is vocal only , where he is very generously doing exactly that , using the voice as a sound where he explores the nuances of it in a microscopic way , rid of the luggage of the opera tradition or any other vocal disciplines / styles / techniques )

The full article is available here

1 thought on “The Passion of Karlheinz Stockhausen”